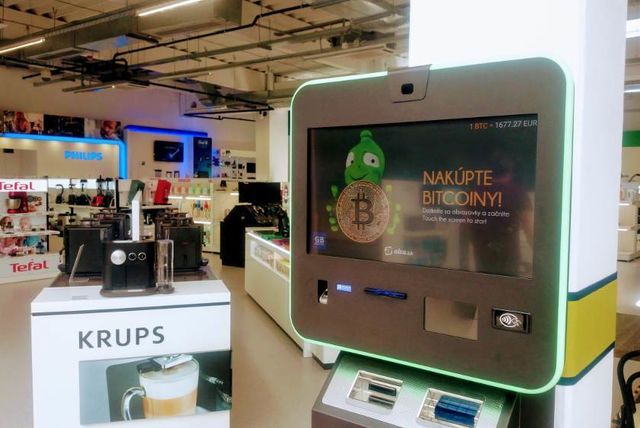 Prague, May 18th 2017. Europe’s retail group ALZA and Bitcoin ATM manufacturer GENERAL BYTES announced today that Alza will accept Bitcoin for any purchases made in their on-line store of 50.000+ items whilst local shoppers will be able to purchase and sell Bitcoin via the GENERAL BYTES Bitcoin ATMs located in two of its outlets in Prague 7 and Bratislava.

With close to 100 retail locations throughout the Czech and Slovak Republics, an Alza showroom or pickup location is always nearby. In addition to their physical retail channel, Alza offers online shopping services throughout Europe via www.alzashop.com

“Our customers asked for it. Alza.cz is a technology company that sets trends and Bitcoin is a progressive technology. With this step we are going to meet its potential and this results in benefits to our customers.” Jan Sadílek from Alza.cz commented.

Alza is the first large European retailer that accepts Bitcoin online and their showroom locations in Prague and Bratislava are some of their busiest outlets serving thousands of customers daily. Customers can now purchase (and sell) Bitcoin using the Bitcoin ATMs provided by GENERAL BYTES.

“At GENERAL BYTES we are excited to participate in this project. Everyone here knows Alza, it’s the #1 online store in the Czech Republic and Slovakia and we think this is a great push for Bitcoin throughout Europe.” says Karel Kyovsky, CEO of GENERAL BYTES s.r.o.

Adoption by major retailers like Alza shows Bitcoin is no longer deemed the grey-economy currency used only by hackers but a mainstream technology used by tens of millions users worldwide.

Observant readers will have noticed that both ALZA headquarters and GENERAL BYTES are both located in Prague’s hip and trendy Holešovic district that also happens to be home to Paralelní Polis (www.paralelnipolis.cz ), an organization that educates the general public on cryptocurrencies, is host to world’s first bitcoin-only cafe, offers seminars and regular workshops. Without all the work done by Paralelní Polis over the past years, a mainstream Bitcoin integration like Alza would most likely never have happened.

GENERAL BYTES s.r.o. (www.generalbytes.com) was founded in 2013 and is one of the world’s leading Bitcoin and blockchain technology providers. They are best known for their range of Bitcoin ATMs and point of sale terminals installed worldwide. GENERAL BYTES is privately owned.

Retail giant ALZA (www.alza.cz) was founded in 1994 and had a turnover of 643 million EUR in 2016. Alza offers online shopping and local offline pickup / shopping through their vast network of retail locations and pickup points. Alza is a Czech joint stock company and owned by a group of investors through the holding company L.S. Investments Limited.

Bitcoin is a major digital currency without ties to any bank or government. It is underpinned by blockchain technology, a digital ledger system that uses cryptography to secure its transactions.

It was an exciting and productive year for the GENERAL BYTES, which showed that we could cope with challenges on the way, move quickly and…
Read more

GENERAL BYTES, a leading manufacturer of cryptocurrency ATMs and software provider for managing ATM business, has launched the GMKit for…
Read more

NOT YET ANOTHER SALE, rather good deals! 🔥 Check out special Christmas prices for Bitcoin ATMs — brand new BATMTwo's with 7-inch…
Read more

We are happy to announce that EveryTrade is now WhaleBooks! Although it's been a good time under the EveryTrade name, it's time to move on…
Read more

2-way Bitcoin ATM are becoming the standard in the industry

With currently just over 7000 bidirectional machines installed in the USA, two-way Bitcoin ATMs (crypto-to-cash, cash-to-crypto) have a…
Read more

GENERAL BYTES and EveryTrade.io will attend the Bitcoin 2022 conference in Miami this year, and to celebrate this, we are giving 6 GA…
Read more
All news