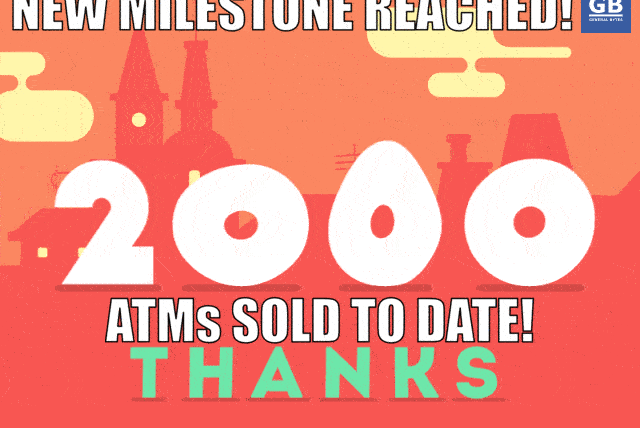 Just over 5 years ago we set out to create new applications for the back then, all new cryptocurrency called Bitcoin. We started producing Bitcoin ATMs to help Bitcoin grow, make it a little less virtual and allow the general public to easily purchase some cryptocurrency using a metaphor of something they are already familiar with, an ATM.

Little did we know that only 5 years later we would have produced and sold well over 2000 machines, be the fastest growing ATM manufacturer globally and support well over 40 different cryptocurrencies and be the market leader in many countries worldwide.

From the 2000+ Crypto ATMs sold by GENERAL BYTES to date, over 1000 units have been sold in the past year alone and independent data by third-party resource, CoinATMradar, the most up to date resource for information in the cryptocurrency ATM industry, clearly shows a meteoric rise in the number of machines since 2017 and seen from a per country basis, GENERAL BYTES is the #1 supplier in most (if not all) European countries.

Our primary focus at GENERAL BYTES over the past year has been to extend the number of supported crypto- and fiat-currencies, enabling new features like ERC20 token compatibility (Yes, you can now add your ICO token!) and we've added new features like a video screensaver and a Telegram Bot for ATM operators that allows our clients to get live updates from their ATM network.

At the same time, we expanded support for our clients by offering support on multiple continents, added weekend support (because business never stops) and made available many new languages for that truly global ATM experience. (over 33 languages now supported!)

In October we celebrated 5 years of GENERAL BYTES with a massive cake in the shape, size and almost same weight of a BATMTwo ATM and we are still working, months later to burn those extra calories off!

We often get asked what the secret to our success is and honestly, we do not know for sure but we work hard to offer our clients the best feature-set ever found in a cryptocurrency ATM, at the very best price in the industry and provide our clients with a constant stream of (free!) updates that keep bringing new features to their existing terminals.

We want to thank our clients for their support over the past years. Without their support and valuable input, GENERAL BYTES would not have been the company we know today.

This article first appeared on Medium.

It was an exciting and productive year for the GENERAL BYTES, which showed that we could cope with challenges on the way, move quickly and…
Read more

GENERAL BYTES, a leading manufacturer of cryptocurrency ATMs and software provider for managing ATM business, has launched the GMKit for…
Read more

NOT YET ANOTHER SALE, rather good deals! 🔥 Check out special Christmas prices for Bitcoin ATMs — brand new BATMTwo's with 7-inch…
Read more

We are happy to announce that EveryTrade is now WhaleBooks! Although it's been a good time under the EveryTrade name, it's time to move on…
Read more

2-way Bitcoin ATM are becoming the standard in the industry

With currently just over 7000 bidirectional machines installed in the USA, two-way Bitcoin ATMs (crypto-to-cash, cash-to-crypto) have a…
Read more

GENERAL BYTES and EveryTrade.io will attend the Bitcoin 2022 conference in Miami this year, and to celebrate this, we are giving 6 GA…
Read more
All news